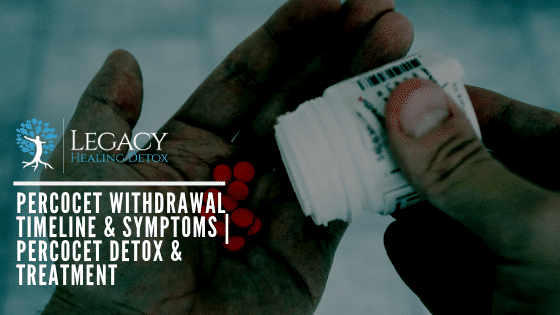 Addiction affects millions of people around the world, and it can be a frightening and difficult decision to make the first steps toward sobriety.

Detoxing from any addictive substance takes time, effort and careful management in order to stay healthy and sober throughout the process.

Below is a general timeline of Percocet withdrawal symptoms and a list of what someone who is coming off of Percocet can expect to encounter during his or her detox.

Percocet is an opioid drug that combines a narcotic called oxycodone with acetaminophen, which is the generic name for Tylenol.

It is intended to help manage pain following a serious injury or surgery, and it is not designed for long-term use.

Because it contains oxycodone, which is an effective yet addictive opioid, Percocet is meant to be used under close supervision of a doctor. Unfortunately, the CDC estimates that 25 percent of people who receive an opioid prescription like Percocet will end up struggling with addiction.

It’s important to note that anyone can successfully be weaned off of Percocet with care and assistance from medical professionals. Detoxing alone is less successful and can even be dangerous in some cases, so it is always recommended to enter into supervised care for this process.

Every drug has what is called a half-life, which determines how long it will linger in a person’s system. For Percocet, the half-life is about three hours for the standard version and 4.5 hours for the extended-release. After a few of these half-life cycles, the drug will have been completely metabolized from the brain, and withdrawal symptoms will begin.

Like most opioids, Percocet withdrawal symptoms can be divided into three stages: early, peak and late. Each stage has different symptoms and lasts for varying lengths of time.

Percocet is generally considered a short-acting opioid. This means that, in addition to having a relatively short half-life, it also has a somewhat shortened detox period.

This stage begins anywhere from eight to 16 hours after a person’s last dose of Percocet.

The majority of symptoms will be experienced physically, but some people struggle with altered mental states as well. For most, this part of detox often feels like a bad cold or the flu.

In most cases, the severity of the withdrawal symptoms will gradually increase for around 36 hours, but it can take up to three full days to reach the peak of withdrawal. This is the most challenging part of detox, and it is the stage where users are most likely to regress. Because of the difficulty, professionals always recommend that a person in recovery should not be left alone during this time.

Opioids depress heartbeat, breathing rate, appetite and digestive functions, so as the Percocet is cleared from a person’s body, all of these systems will begin to function normally again. This can lead to cramping or diarrhea as the digestive system begins working properly as well as feelings of panic or anxiety due to the slight increase of heart and breathing rates.

Other peak withdrawal symptoms can include the following:

Any of these can present alongside the flu-like early withdrawal symptoms, and they will usually last a few days.

A typical full detox from Percocet may take up to 10 days, but it is common for some physical symptoms to linger for a period of time afterward as the body readjusts to its new normal.

As the brain begins to regain its equilibrium, mental and emotional symptoms should clear up, and the person’s mood should improve. Most who complete their Percocet detox say that they still feel sluggish and slightly sick in the days immediately following the end of the process, but this should also dissipate fairly quickly as recovery continues.

Fortunately, the withdrawal symptoms for Percocet are generally not life-threatening as they are with some other narcotics. However, they can be quite uncomfortable and difficult to weather alone. To maximize the chances of success, checking into a rehab program is usually best.

Following detox, there may still be lingering psychological issues surrounding the drug or the reasons a person began abusing it in the first place. Staying sober will require behavioral therapy and lifestyle changes that are much easier to make with experienced, professional help.

No two detox paths are exactly the same. There are many mitigating factors that will determine the best way to manage withdrawal symptoms for a particular person. This includes mental state, the severity of addiction and whether or not previous detox attempts were successful.

Detox is a Process

Ultimately, detoxing from Percocet should be viewed as a process that will take time and patience. It’s better to move slowly and minimize discomfort so that a person is less likely to relapse.

Opioid addiction is difficult, but it is not insurmountable. With an understanding of what to expect and assistance from trained professionals, anyone can be weaned off of Percocet and go on to live a full and happy life.